In 1979, Robert Johnson was a lobbyist for the burgeoning cable industry. That’s when he got an idea for a channel called Black Entertainment Television. He started small, just a few hours of programming a week. But by the 1990s BET had become a cultural touchstone. In 2001, he sold BET to Viacom for $2.3 billion, making him the first African-American billionaire in US history.

NPR’s How I Built This – LinkedIn: Reid HoffmanEpisodes 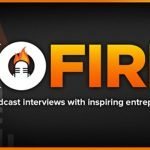 Entrepreneurs on Fire – 2048 with Alex BanayanEpisodes